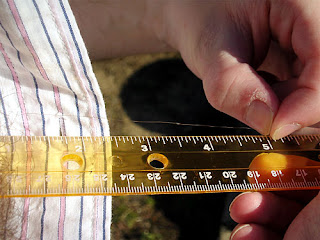 Some people’s greatest talents remain hidden for their entire lives — but this Saturday, Doug Williams will put his on display and, he hopes, achieve ever-lasting fame.

Williams, you see, has a five-inch nipple hair.

That’s not a misprint. It’s a single hair, growing from his left nipple, and it’s five inches long.

On Saturday, the Williamsburg resident will have the hair officially measured and logged by the folks from the Guinness Book of World Records, who believe Williams’s follicular feat may be the greatest on the planet.

There’ll also be a barbecue.

And why not celebrate? Yes, most people have nipple hairs — but no one has a nipple hair like Doug Williams.

“It’s mostly a genetic gift,” said the 25-year-old, adding that he suspects — though this can’t be proven scientifically — that the hair’s unusual length has something to do with his habit of eating at least one cheeseburger every day (alas, he’ll never make the Guinness Book for that).

As with so many things in life, size matters — but it’s not the only requirement. In accordance with the Guinness Book’s regulations, the hair will be washed and then measured three times by a local doctor. Anything over 4.5 inches will break the record — yes, there is a current record-holder, Simon Mould of Great Britain.

Trouncing Mould at his own game would, of course, come with worldwide publicity, but that’s not why Williams got into the nipple-hair racket.

“I am not attempting this record for the money,” he said. “It is enough for me to know that I have inspired an entire generation of young people to grow long body hairs and achieve their own dreams.”
Posted by dom at Thursday, May 31, 2007

That's disgusting. We can at least be thankful it wasn't a woman with the record.

I believe Guinness banned Russian women from entering the competition.