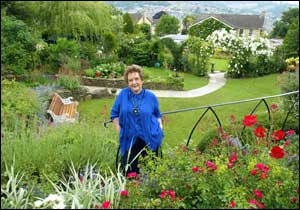 Sheila Batterbury couldn’t bear to leave her garden — so she took it with her. Sheila, 74, spent a year transferring 600 plants, shrubs and bushes into grow-bags.

She hired an extra removal van to drive them 150 miles from South East London to Bathampton, Somerset. Then she spent six months replanting her original award-winning design — even buying two neighbouring plots to fit it all in.

The retired teacher said: “My garden was my pride and joy. I just couldn’t leave it behind.“I put roses, azaleas, wisteria, rhododendrons into compost bags and trays. I did most in winter to disturb them as little as possible. There wasn’t much left when I’d finished.”

Sheila and hubby Paul, 72, an ex judge, had spent ten years cultivating their original third of an acre plot at Greenwich. Their buyer did not mind what they removed.The mum of two dug up everything from tiny campanulas to a 5ft lilac bush, conifers — and a 15ft lamppost. 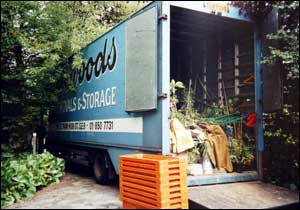 Her new half-acre creation has now won a place in the prestigious National Gardens Scheme, and can open to the public for charity.Sheila, whose first stint last weekend raised £300, said: “It looks wonderful.”
Posted by dom at Saturday, July 01, 2006

im thinking give a brit some beer, fish and chips and a patch of yard to garden, and their happy campers...

if shaving your head is what you do when you drink beer...we're cutting you off..

You'd better put your sunglasses on the glare is blinding !

This actually is my Mum. The distance quoted is incorrect - it is 125 mi. links http://www.batterbury88.fsnet.co.uk/
and on my page http://www.simonbatterbury.net/home/sheilabatterburysgarden.htm